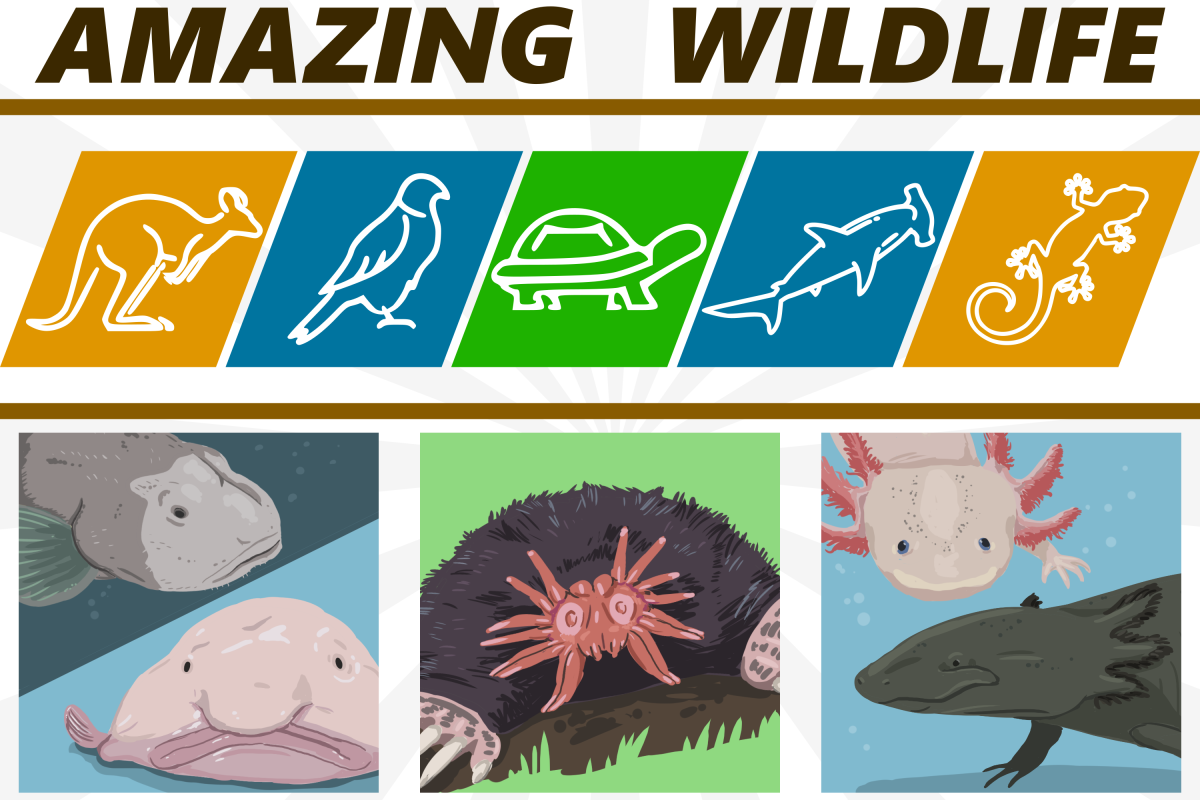 Rarely seen alive in their native habitat – one species of deep, ocean dwelling fish gained great notoriety from a famous internet photo. The animal in question was nicknamed “Mr. Blobby.”

“Mr. Blobby” was found during a research expedition in 2003 off the waters of New Zealand. With a strange, jelly like appearance, large, slightly indented dark eyes and a prominent, bulbous nose-like flab sagging below the upper jaw of its face – his image became well known across the world. The specimen was identified as a Fathead Sculpin – sometimes known as a blobfish. There are more than 10 species of blobfish in the family Psychrolutidae.

Fish in this family are found in marine waters of the Atlantic, Indian and Pacific Oceans usually at depths between 2,000 and 4,000 feet.

The strange-looking fish thrives in underwater regions where the pressure can be up 120 times greater than at sea level.

The common name ‘fathead sculpin’ refers to the large, globular head and ‘floppy’ skin. The popular name, blobfish, comes from the fishes appearance especially when exposed to the air pressure at the surface. In their normal, deep ocean habitats – blobfish resemble most other fish species.

They are typically a foot long, have large black eyes, a large, wide mouth and a head that makes up most of its body mass.

Depsite a general fish-like appearance, Blobfish do have different anatomy compared to other fish.

Blobfish do not have a swim bladder, they possess soft bones, relatively few muscles, and they lack scales. Blobfish rely on external water pressure to help maintain their shape.

The gelatinous body is less dense than the surround water which allows them to hover, nearly motionless above the sea floor bed with little effort.

Like other lie-and-wait predators, Blobfish use as little energy as possible by remaining stationary and waiting for anything edible to float into their open jaws, when they suck their prey in.

Since Blobfish are rarely seen alive – most specimens are discovered as by-catch from deep sea fishing vessels – not much is known about their biology or reproductive activity.

Though the precise life expectancy of Blobfish is unknown, deep-water fish generally tend to live longer than their shallow-water counterparts. Some species are believed to live up to 100 years due to slow growth rates in the cold waters and a lack of common predators found throughout the upper levels of the ocean.

Today, the most famous Blobfish, “Mr. Blobby” is preserved in the collection at the Australian Museum – though his appearance has change dramatically over the years and he no longer resembles his original photo that once earned the Blobfish the unfortunate distinction as the world’s ugliest animal.

Often considered one of the world’s weirdest-looking animals is the small subterranean mammal known as the the Star-nosed Mole.

The Star-nosed Mole is a native of eastern North America (northeastern United States and southeastern Canada). They may be found from the Atlantic coast lands as far west as North Dakota and as far south as Georgia.

Star-nosed moles are found in a range of habitats that have moist soil. They prefer areas with poor drainage, such as forests, wet meadows, and marshes. They will also inhabit stream banks, lakes and ponds. Unlike all other mole species – the Star-nosed mole can swim – remaining underwater up to 30 seconds at a time.

The Star-nosed mole is a very distinctive mammal measuring about six inches long with black fur, and wide forefeet tipped with talons that are designed for digging. They possess a scaly, fleshy tail that is covered in concentric rings and short, coarse hairs. The tail is nearly as long as the combined length of the head and body.

Like other moles, it digs with the broad front feet while the hind feet push against the sides, stopping periodically to shove the loose soil to the surface where it creates a mound. They can move up to 5 mph. Star-nosed moles tunnel from just below the surface up to 2 feet below and may be up to 100 feet long. Those living in wet soils and near bodies of water will burrow above and below the water table and usually have tunnels that open at or even below the water’s surface. Other animals, such as shrews, may even use the moles tunnel system to move around underground.

Though they have relatively poor eyesight, as a semi-aquatic mammal, Star-nosed Moles can forage underwater by probing bottom sediments with their fleshy tentacles which are equipped with touch receptors.

Their signature feature is the rose-colored ring of 22 fleshy, retractable tentacle-like appendages, called rays, surrounding its snout in a symmetrical pattern, with 11 projections on each side.

The distinctive star organ on the mole’s snout contains more than 100,000 nerve fibers – all located within an area the size of a human fingertip. These specialized sensory receptors are known as Eimer’s organs and are the most sensitive touch organs found in the animal kingdom.

Using video recordings of the animals, researchers have learned that by using their rays, the moles can touch as many as 10 different objects in a single second. These amazing animals can identify individual prey in less than two-tenths of a second and then determine in just 8 milliseconds whether or not it is edible. Star-nose Moles are considered to eat faster than any other mammal on Earth.

In addition to their lightning fast ability to find, detect and consume their prey – the Star-nose Mole possesses yet another unique ability.

When diving underwater in search of prey, star-nosed moles exhale air bubbles through their nostrils – as many as 10 bubbles per second. These bubbles spread over objects they are exploring, allowing them to collect odorants. Using this strategy a mole can even follow an underwater scent trail.

The Star-nosed mole has an important role in many wetland ecosystems. In addition to being a food source for some carnivores and consuming many aquatic invertebrates, the Star-nosed mole’s tunneling through the moist ground, helps provides aeration for the roots of plants.

Star-nosed moles are not uncommon, just rarely seen due to their subterranean and aquatic lifestyle – when they do come above ground searching for food, it is usually at night.

A creature that has long been a part of Mexican history and culture is the Axolotl. With a broad, flat body and lizard like limbs and tail – wild Axolotls are dark-colored with greenish mottling.

Axolotls are found exclusively in two spring-fed, freshwater lakes in the middle of Mexico City. The word “axolotl” comes from Aztec language and it means “water dog.”

It has also been called the Mexican walking fish (though it is not a fish at all – axolotls are actually salamanders. One of the species of mole salamanders, their closest relative is the tiger salamander.

The axolotl is a type of salamander that essentially remains a juvenile its entire life.

Unlike most salamanders, Axolotls do not undergo metamorphosis from larva to adult form where breathing changes from gills to lungs. Instead, they remain aquatic their entire life.

Though it develops functional lungs, axolotls still uses specialized, external gills – feathery like appendages that are visible extending out from the sides of the back of it’s head.

Axolotls possess one distinguishing feature that has made them a popular topic of research study. These amazing amphibians have the ability to regenerate tissue. From damaged, or missing limbs to their heart, spine and even parts of their brain – they are capable of regrowing body parts (both internal and external) perfectly without even producing scar tissue. They are able to regenerate tissues and organs countless times and are known to be highly resistant to cancer.

Like all amphibians, Axolotls have delicate, soft bodies with permeable skin. In fact, most of the Axolotls body is made of cartilage rather than bone.

With webbed feet and a long tail, Axolotls grow on average up to 9 inches long but they can reach lengths nearly double that.

Axolotls can detect electrical fields and also use their vision and chemical cues to discover prey. They are opportunistic carnivores who will feed on just about any prey they can catch. Using a powerful suction force, they essentially inhale their prey which may include mollusks, insects and fish. Axolotls are even known to eat each other.

During the day, they often burrow into the aquatic vegetation and mud to avoid being eaten, while they become most active at night. While they use their gills to breathe underwater, they may swim to the surface for air on occasion.

Males Axolotls can be identified by their enlarged cloaca while females have a smaller cloaca and a more round, plump body.

During breeding – which occurs between March and June – Axolotl pairs will engage in a dance – sometimes described as a type of “waltz” with both animals moving in a circle. The male will then move away while undulating the posterior part of his body and tail, and the female follows.

The male will deposit a a cone-shaped jelly mass known as a spermatophore by vigorously shaking his tail for about half a minute. He will then move forward one body length and the female then moves over the spermatophore, also shaking her tail, and picks it up with her cloaca.

The female will lay 100 to 300 eggs which are deposited in the water and attached to substrates. Eggs hatch at 10 to 14 days and the young are immediately independent. Axolotls become sexually mature in about a year. Most live about 6 years.

Tilapia and carp were introduced to their native habitat in the 1970’s and 1980’s – these invasive fish species now pose a major threat to the wild population of axolotls, whose native lakes and wetlands were also drained significantly to prevent flooding and allow urban expansion.

Despite their place in Aztec and Mexican culture, little is known about wild populations of these fascinating animals. Many of the axolotls in captivity today are descendants the first laboratory animals brought to Paris for study in 1860. Most information about these unique members of the animal kingdom has been gained from captive bred individuals. Today, the wild population of Axolotl remain Critically Endangered.

Special thanks to the following organizations for their education, research and conservation programs that provided information for this episode: